‘Calendar’ is a remarkably stretchy word if it can be applied to a notched post, a psalter and a stained glass window – to name only a few examples from the profusion of forms that calendars have taken, from giant earthworks and systematically planted flower beds, blooms coming day by day, to candles burnt down a fraction at a time and clock-faces on which the months are hours in miniature. Today, the calendar format that comes first to mind may well be the month-to-view wall chart with its shiny picture above and gridded dates below. When we look at the year on one of these calendars, we see the months in succession, one at a time, each a space to be annotated with our significant dates. Time passes sequentially in the pages of the wall calendar: we turn over the leaves from front to back and arrive at the end. But a year is a circle as well as a line; it repeats even while it progresses. There are calendar formats that allow us to visualise more clearly the circular qualities of the year, formats that represent the cycle of the seasons and answer to our sense of Christmas ‘coming round again’. 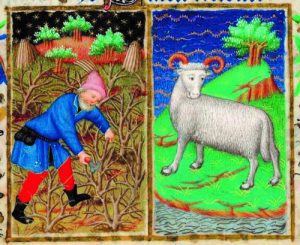 In medieval almanacs the year was often represented on a dial, with the months arranged around the edge, each with its corresponding zodiac sign, December leading into January as easily as June into July. When the year is represented as a wheel in a printed book it gains a top and a bottom – usually summer at the top and winter below, corresponding to our sense of the year’s high and low points, which are in turn logically derived from the height of the sun in the sky. In the painted tower at Longthorpe, a thirteenth-century house near Peterborough, the months climb the side of an arch towards a summer apex and descend to winter on the other side, mirroring the stages of life, ‘The Seven Ages of Man’, which grow up the side of an arch on the adjacent wall, pause at a triumphant maturity, and descend again towards old age.

What if the circle is replaced by a square? The Norman font at Burnham Deepdale is carved with the labours of the months on three sides and four bold trees on the fourth, perhaps so that the font could be stood close to a wall without losing a quarter of the year. With four months to a side, the turning-points of the year must fall between April and May, August and September. It’s true to experience that there are corners in the year, though the corners are not always the same from one year to the next. It may be the weather that designates the turning of a corner into Spring, or the sudden drawing out of days (which is not a steady process but occurs in sudden jumps towards the equinox), or the hinges may articulate the join between school terms or periods of work. Square, rectangular and polygonal calendars represent the year not as a steady curve but as a phenomenon with critical junctures and new directions.

Though most calendars take the form of books, pictures, and objects, the year can be represented in an almost limitless number of physical forms. A whole building, for example, might become a calendar, with its walls, wings and windows counting out the units of time. For a period in the early seventeenth-century it looked as if ‘calendar houses’ might become a distinct architectural genre; the idea certainly answered to the Elizabethan and Jacobean fascination with closely measured temporality and with ingeniously mimetic art forms that might embody their subject in their shape. Numbers were aesthetically and philosophically meaningful, whether the numbered steps of a dance (demonstrating in miniature the great dance of the heavens) or the numbered stanzas of a poem counting out the hours of a day. To design an entire building around the numbers of the calendar was more than a fancy. These were nature’s numbers – 7 days, 12 months, 12 signs of the zodiac, 365 days – and they must express nature’s harmonious proportions. When Thomas Sackville remodelled and dramatically extended the old medieval house at Knole in Kent, he made it a calendar house on an extraordinary scale, with 365 rooms, 52 staircases and 7 courtyards – or so the legend has run for centuries. ‘I do not know that anyone has ever troubled to verify it’, wrote Vita Sackville-West.

This is an extract from Time and Place: a Pocket Book on the Art of Calendars by Alexandra Harris in which she explores different forms of calendar-making, and discovers in them a delicate weave of seasonality and locality, inspiring us all to look again at our surroundings and take note of the turning of the year. Buy the book here, or from your local bookshop.

Alexandra Harris is a renowned and prize-winning writer, critic and cultural historian whose books include Weatherland, Romantic Moderns, Modernism on Sea and Virginia Woolf.

The image at the head of this extract is an illustration of a hunting scene for October in an Anglo-Saxon calendar, eleventh century, British Library.

The illustration in the body of the piece is March in the Bedford Book of Hours, c.1410-1430, British Library.