It’s easy to forget that the Dorset Wildlife Trust’s centre at Kingcombe is a working farm. Focussing on the ‘wildlife’ bit of the name, I’d realised I’d sort of edited the farm animals out of the picture on my previous visits. One of the sheep in the small field by the vegetable garden had clearly decided this was not on, and fixed me with a stare that managed to combine baleful and belligerent, daring me to blink first. That might (possibly) have been me projecting, of course, but I swear that mixed in with its cud was more than a hint of gum-chewing insolence.

‘My’ sheep was one of a half a dozen or so whose lambs frisked about on stocky little legs, adding their tremulous sopranos to their mothers’ bass baa-ing: the quintessential sound of spring, as unmistakable a seasonal indicator as the smell of mown grass.

I walked along the lane leading up to the Wessex Ridgeway, the way I’d come in January.  The trees had lost the sharp distinction of winter, and even the crisp pointillism of early spring had given way to a kind of blurring – a soft wash of green. It was a strange and hazy day anyway, and I was feeling strange and hazy myself, with a caffeine-withdrawal headache and a low-level inability to focus. The sunshine was filtered by a thin layer of cloud, and the wind, surprisingly strong and cold, set the whole green hillside rippling. 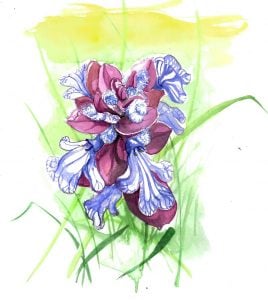 I made my way up the slope, wading through a sea of (take a deep breath): dandelions, daisies, speedwell, chickweed, stitchwort, cow parsley, clumps of tiny field forget-me-nots, pink pompoms of clover, vetch, white campion and the misnamed red campion that’s actually bright pink, cowslips, bluebells, cuckoo flower, dock, bugle, nettles, thistles, at least six types of grasses that I could distinguish and no doubt many more that I couldn’t.

Above all, buttercups everywhere, their yellow so bright that they seemed to be powered from below, as though some subterranean switch had been flipped and turned them on like a gigantic filament lamp, a million tiny glowing tips, throwing their light back up at the sky.

My circular walk next took me across a field full of black bullocks that eyed me warily, but not half so warily as I eyed them. I was slightly relieved to make it to the gate on the other side. The cows, like the sheep, are an essential part of the maintenance team that make up Kingcombe’s reserve, partly because they move nutrients around – in one end and out t’other – and partly because of the impact of their grazing. Ashley Kirk, Kingcombe’s stockman, spends much of his time deciding which animals to move where for the greatest health of both them and wildlife. The key is keeping it all in balance. Farming, especially perhaps on an SSSI site like this, is most like slow, skilful plate-spinning.

Left to its own devices, grass will quickly take over, supressing the more delicate plants with its vigorous growth, so it has to be kept in check.  Ashley deploys the animals as a carpenter might use different grades of sandpaper. The cows for the rough stuff – they lasso grass with their muscular tongues and yank it out in great tufts (‘like pulled pork’ according to Sam Hamer) – whereas the sheep, delicate nibblers, are good for a fine finish.

Back at the centre, a man with headphones cupped around his ears like two halves of an orange was walking up and down pushing a lawnmower while Sam told me stuff about grass.

‘This is just bog-standard rye grass you see on any lawn. But see here – it’s all big and clumpy? That’s where we didn’t cut it for a year. And this,’ – he runs his hand through the smooth bowling-green finish next to it– ‘gets cut every week. Same species – same conditions – but look at the difference.  This is basically a bonsai version: whole different microclimate.’

Left uncut, the grass quickly bulks up, storing carbohydrates in its roots, and forming broad-leaved clumps with bare earth in between where nothing much can grow. Without the animals, Kingcombe’s meadows would quickly lose their astonishingly rich biodiversity, not just in flowers, insects, bird and wildlife, but fungi too. Waxcaps, for example, need a tight sward – so do best on fields maintained by the judicious application of sheep.

‘People don’t think of what we do as farming, but it is,’ explains Sam. ‘We do send the animals to market, and that does form an important part of our income, but primarily what we’re farming for is wildlife’.

Before I left for the day, I stood on the high ground in a meadow full of wildflowers and busy with insects, and looked across the Hooke valley. It was a beautiful view. The far hills sported cattle like enamel brooches, black-and-white against their green lapels. Closer by, tractor-treads patterned the bare earth as neat as tweed. There’s farms, and there’s farms, I thought to myself, and wondered how many of us see past the toffee-box prettiness to the songbirdless, lifeless monoculture that it represents. The Kingcombe approach to farming may not be unique, but it is still depressingly rare. I walked back down to the carpark, leaving the insects, birds, and all the animals that make up this oasis of biodiversity to get on with their lives undisturbed.

ANITA ROY is a writer and editor based in Wellington, Somerset. She holds an MA in Travel and Nature Writing from Bath Spa University and is a columnist for The Hindu Business Line newspaper in India. More of her writing can be found at www.anitaroy.net

Join the discussion and tell us your opinion.

Lovely, so evocatively descriptive. I’m very much enjoying these monthly forays of Anita’s…

What beautiful, lyrical writing – it almost makes me feel as though I was there.